How happy am I to have a new battery? SO HAPPY!!

We had apparently used the previous battery improperly by plugging in the AC charger too much, which caused the battery electrons to stagnate. It became so bad that the battery was pretty much useless as you could use the laptop for MAYBE a half hour unplugged. I will definitely care for this battery properly.

This Morning
I hit the Festival of Nations around 11:00. Of course, the food booths were at the top of my list.

I had such a hard time deciding where to go! But, first….aguas frescas? Sign me up!

I had mango. Unfortunately, these weren’t half as good as the aguas frescas stand at the Albuquerque flea market.

I walked up and down the line of booths, trying to make a decision. Look, the Norwegians are next to the Israelis! 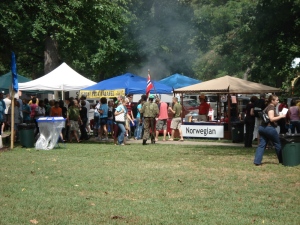 Ethiopian would have been the best bet, but I can have Ethiopian any day of the week. So, after much deliberation, I decided upon the Haitian rice and turkey. It was really good…I only wish the serving had been a bit bigger (or maybe that I had had a piece of turkey with actual meat on it). For dessert, I decided to have a crepe because baklava didn’t sound so appealing today. I was going to go with the Romanian booth because crepes were $2 cheaper than at the French booth. Unfortunately, I had a bad feeling that the chocolate filling was going to be some sort of Hershey’s syrup concoction (because there were giant bottles of Hershey’s but no Nutella in sight). The good thing is that the Frenchies were using Nutella; the bad thing is that the crepes were miniscule (for $5, I would like a regular sized crepe, please).

Ah, well. I will know for next year. Or for tomorrow.

I saw scads of people from my school because the first year MSWs are required to do a day of service before classes begin. This year’s project was the Festival of Nations, so I kept walking by people who I see everyday. Fortunately for me, I had my baseball cap on, which was a surprisingly good disguise. No one recognized me. Not that I would have minded saying hello to these folks….but one of the things I enjoy about weekends is being around non-work people….even if the non-work people are strangers.

Anyway…among the sights I saw this morning were these crazy bikes: 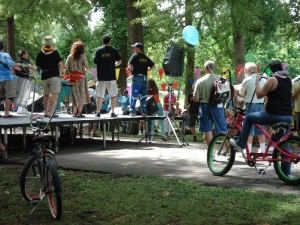 Yeah…those handlebars are a bit ridiculous. The riders had a difficult time managing theses bike through the crowds of people, but the riders tried their darnedest! Gah!

I also saw some of the Highland Games demos…like this stuff: 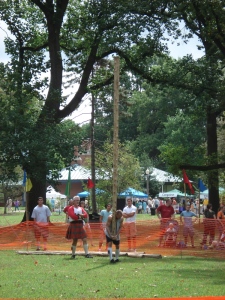 There was also a woman doing the log throw (or whatever it’s called), and wow! was she impressive! We’re talking major arm and back muscles, folks. Geez.

The Morris dancing group had a good time. Don’t they look like they’re having fun? 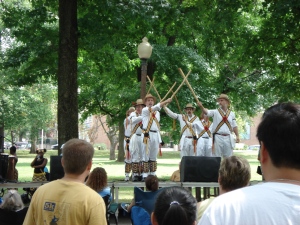 I had to leave during the belly dancing…not because I found it boring but because my left leg was hurting so much I felt sick to my stomach.

Tomorrow I’m going to research setting up a doctor’s appointment so that I can see a physical therapist. My old DDR knee injury became agitated at Six Flags nearly 2 months ago. Afterwards, I was walking funny because my knee was hurting, and I think my funny gait messed up my hip. Now I am in constant pain, no matter how much stretching I do.

This Afternoon
I spent my afternoon doing errands – the post office, the grocery store, laundry, etc.

I did, however, chat with Porkchop for a while. It’s a good thing I didn’t move to Albuquerque because I would be jealous of the litho press…because that’s where Porkchop spends all of her time. She even has to go in tomorrow morning to finish up some printing. Murrr!!!

Tonight
I made brownies because I couldn’t find any treats that I wanted at the grocery store.

Also, I finally listened to a voicemail that my sister left this afternoon. Of all the things that I thought she might have to say, I didn’t expect her to ask if her ex-boyfriend could stay at my house while he road trips it up to Michigan.

Yes, this is the boyfriend who went a bit off his rocker last summer and did things like try to break into someone’s house. Some of you might recall that he was then diagnosed as bipolar. My sister finally had to break up with him last month because of many reasons (as you might imagine).

My sister said that he is doing much better now since the doctors figured out that he was on the wrong meds. Of course, she assured us many times previously that he was doing “much better.”

Anyway, I said that it was fine for him to stay here…and it turns out that he might be here tomorrow night!

Okay, so you might be wondering why I said he could stay with me if he’s my sister’s EX-boyfriend. It’s because…

1. He’s actually a really nice guy.
2. I feel so bad about the agony and trauma he has experienced over the last year. I hope that he really is doing better.
3. There is no way I could let him fend for himself in St. Louis. So maybe he IS doing better, but if something DID happen to him here in St. Louis…I wouldn’t be able to live with myself.