Porkchop and I skedaddled after work and put dirt in our remaining raised bed, put up more of the trellis, and planted things. Here it is at the end of the day:

The bed with the trellis has sugar snap peas, spinach, lettuce, and radishes. We will add more to the trellis as we plant beans and squash. The 3×3 bed has onions, beets, and carrots. Porkchop also put strawberry plants in pots.

Quite unexpectedly, our beds now contain around 50 earthworms. Over the weekend, we noticed that earthworms were starting to invade our basement! There were dried up bodies littering the floor, and 4 or 5 huddled around the floor drain.

So, while cleaning leaves from the area outside the basement door, Porkchop found the motherlode of worms. This is a mere fraction of them:

A bit blechy, but good for the garden!

Our Bathtub Runneth Over

Holy shizzle, Porkchop and I transplanted sprouts yesterday, keeping the strongest and composting the weakest (a moment of silence for those plants), and this is what we ended up with in our bathtub-cum-greenhouse:

Here is the transplanting action:

For the past month, the garden has been at the forefront of our minds.

We’re either staring out the back window at the garden beds, or we’re in the bathroom staring at the plants.

We keep Great Garden Companions handy, able to recite passages and open the volume at exactly the right page.

Porkchop decides to plant some strawberry plants, and I add spinach to my greens list.

We buy a trashcan for growing potatoes.

We are going crazy with planning things!

The onion sets came into our possession this afternoon from our neighborhood gardening store. Like many establishments in our neighborhood, it was initially difficult for us to ascertain the status of the store. Is it open? Is it closed? Is it closed closed? What the hell, is this how it always looks?

We finally figured out that this is how it always looks:

In some areas, this would pass for an abandoned building, no?

But, signs of life cropped up a couple of weeks ago!

Plants! Live! (As opposed to the layers of dead plants that litter the area.)

Onion sets are $1.75 a pound here, and the guy has red, yellow, and white. In addition to onion sets, you can buy parakeets.

So, by the looks of these pictures, you wouldn’t guess that we had maybe an inch of snow lying about this morning! I would have planted things today, but the air was a tad chilly. Instead we purchased more seeds and a couple of strawberry plants.

I like it to be a little bit light out when I get up in the morning. And it was….UNTIL TODAY.

Stupid government changing the date of the time change!

This time change is always difficult for me, anyway, so I don’t need it aggravated even more.

Yesterday, I felt like I had the biggest hangover ever. And the time! slipped away! so quickly!

It was 11:30 pm before I knew it, which means I’m starting this Monday with less sleep than normal!

Porkchop and I have started playing Mancala. That’s one reason we were up so late. That, and we started watching Man on Wire at 9:00. A counting game and a vertigo-inducing movie…just what I need before trying to sleep.

Strangely enough, I didn’t dream about either of these things. Instead, I had anxious dreams about dessert bars (as in desserts in bar form). I have no idea…

Busy as a Beaver

This is how Porkchop’s younger brother characterized me tonight, as I made hummus, this pita bread, and this baked falafel and yogurt and tahini dressing.

I was worried about the pita bread because it was so sticky and I had problems rolling it out. But, nonetheless, most of the pitas puffed up. Not perfectly, but still tasty…especially with the hummus. 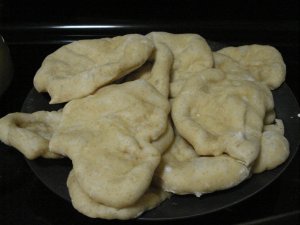 By the way, I used dried chickpeas for the hummus and falafel, and I’m so glad I did. They are WAY better than the canned stuff.

So, our day started out bright and early with Keetah waking us up at 6:30 (an annoying habit she has developed). It actually wasn’t so bad this morning because we intended to rise early anyway for yard work. Our goal was to install garden beds, and that’s what we did.

Here’s Porkchop with the first bed nearly finished (notice how the beds behind it are all super unlevel):

Here I am with the project finished (beds much more level, although we realize not perfectly level, with which we’re okay):

We had to clear out so much swamp grass and chunks of concrete and other debris (a glass tube, wiring, fence collars, etc.). This is just a small portion of the stuff:

Needless to say, we’ll be filling in the beds with some good dirt, compost, and manure. Because our yard is crazy underneath the swamp grass.

There’s a lot more to do in our yard in terms of clearing out debris. Fortunately, we love yardwork.

We celebrated getting the beds in by going out for Sonic. Woo! After that, we hit Global Foods in Kirkwood and TJ Maxx, where I scored by finding Two Leaves and a Bud tea for cheap(er) and Dr. Kracker crackers (my favorite!). We were in Kirkwood to scope out the manure at O.K. Hatchery, where we also picked up some garden gloves for Porkchop and more marigold seeds. I LOVE O.K. Hatchery! It’s packed with all sorts of good stuff, and there’s no pretension anywhere. Just people picking up seed potatoes, bird feed, and cow manure.

OH, but our best find from this weekend are these cookies that Porkchop picked out last night from Jay International Foods:

No, We Didn’t Run Away to Disney World Forever

We’ve been back in St. Louis since Wednesday…Porkchop has been busy having another cold, and I’m still trying to wrap my mind around having to work.

[I can’t get through a workday anymore without being tuned into Pandora. Otherwise, I feel like I’ll fall asleep.]

So…to wrap up our WDW stuff…

After riding Space Mountain and other things in Tomorrowland, there isn’t much to do. The park gets crazy crowded by lunch, and it isn’t designed to handle the number of people that pile in. You can’t walk 3 inches without running into someone.

Save for the ice cream, the afternoon was not fun. But we stuck it out for the Spectromagic parade and the fireworks display. (Had we left the park after lunch, there was no way in hell I would have gone back). 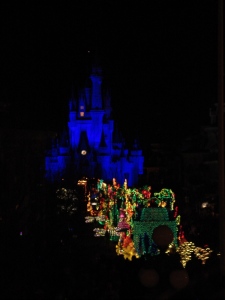 Tuesday
A much better day.

We spent the morning at Disney Hollywood Studios, where we rode the new Toy Story Mania ride twice. It was a fun time of playing 4-D carnival-style midway games! By the end of the first ride, Porkchop was just 500 points ahead of me. Quite unexpectedly, I totally dominated the second ride and edged out Porkchop by around 30,000 points.

After doing everything on our list, we left the park around 2:00 and rested at the hotel some. We rounded out the afternoon by playing miniature golf and taking senior class photos:

Porkchop looks cool here, but I won the game. 50-54…what’s happening?! Am I becoming good at skill games, or is Porkchop losing her touch?

After golf, we used the Disney bus system to get to Downtown Disney for dinner. Since the waterpark by the golf place had already closed, getting to Downtown was a bit inconvenient. The only bus running went to Epcot. At Epcot, we had to pick a resort bus, take the bus to the resort, and then catch another bus to Downtown. In the end, we lucked out by choosing the Saratoga Springs bus, as there was a walkway from Saratoga to Downtown (no waiting for a bus, yay!).

Not so lucky was that we witnessed a woman fall off her scooter as she exited the bus! It was obvious that the woman couldn’t steer her scooter very well, but no one expected her to fall off. As she rode off the bus ramp, she cut her wheels sharply, which caused the scooter to deposit her face-first on the sidewalk. And then the scooter fell on her.

I felt horrible for the woman and for the bus driver, who obviously felt quite shitty.

Anyway, where was I? We did some pin trading at Downtown Disney and had a good dinner.

Wednesday
The day we’d been waiting for! And not because we were leaving that afternoon!

No, Wednesday morning was our Segway tour at Epcot!

After I traded my broken Segway for a functioning one, it was super fun! We had around 45 minutes of training and practice indoors, and then it was off to the World Showcase. Since the Showcase opens later than Epcot, it became our playground as we zig-zagged through the columns at Italy, cruised through the Morrocco bazaar, and traversed the garden bridges in Japan.

Here we are on our Segways:

And here’s a little clip of Porkchop riding hers (listen closely and you can hear me exclaim at the end as Porkchop gets a little too close to me):

The Rest of the Week
Blech. We returned to work right away, which wasn’t fun.

But, we also returned to sprouting tomatoes! They’re a little leggy, but otherwise okay. Oh, and the peppers are quite beautiful: 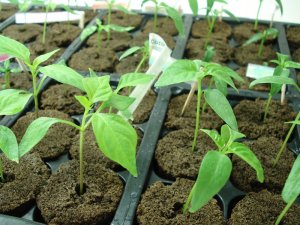 Friday night after work, I requested a chair massage from the “Chinese Exercise” place in the Galleria. I heard from a co-worker who heard from her dance instructor that, if you don’t have time for a full massage, this place is pretty good. While my experience was just fine, Porkchop will tell you otherwise. To begin with, Porkchop didn’t even want a massage, the woman there pretty much forced her to sit down. Then, after the woman had worked on P-chop for a few minutes, a guy took over and started punching her calves and quads. Finally, to top it off, the woman asked if Porkchop was my child and, I swear, proceeded to make fun of us in Chinese (newsflash: it’s never cool to make fun of people, especially when they can’t understand you). When we left, the woman told Porkchop, “I love you, baby.”

Huh? We won’t be going back.

I also love the Mexican hot chocolate at Cafe Ventana! 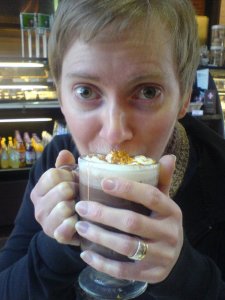 I declare this the best hot chocolate in St. Louis. The cayenne pepper and orange zest make for an amazing drink. The beignets are also pretty darn good. A cinnamon sugar one came with my drink, and next time I’m going to try the chocolate one. Yum!