The 64/40 Construction Countdown sign displayed 6 Months 0 Days this morning, which means it’s time to check in on this year’s goals. Here’s the list with comments in bold:

In other news, check out my nautiloid! 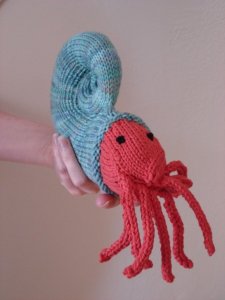 It’s going out to a friend as part of my Making Things 2009 project on Facebook.

I let a couple get a bit too ripe, but the others are firm and juicy and sweet. *yum*

I also picked some more pole beans this morning.

We made smoothies for breakfast, I’m making roasted garlic and rosemary bread, Porkchop’s working on a corn chowder, and we’re enjoying delicious sweet iced tea. It’s extra delicious because Porkchop thought I said “around a cup of sugar,” when I actually said “around a half-cup of sugar.” It reminds me of the iced tea my Grandma Freeman made when we were young, only our tea isn’t as sweet.

All in all, it’s a good day for the hottest freaking day of the summer.

If it doesn’t settle down to the high 80s tomorrow, I will be so sad.

Have a great weekend! Stay cool!

Don’t Stop ’til You Get Enough

Porkchop received a couple of voicemails with the news this evening. It’s amazing what happens while you’re going about minding your own business.

Michael Jackson had a weird, troubled life, and it’s unfortunate it took the turn that it did. That said, MJ’s songs are part of my childhood soundtrack, and I can’t help feeling a little sad (Porkchop is a lot sad, maybe, but trying to not show it).

Soon after my family had cable hooked up, my mom signed us up for that crazy new station called MTV.

And then our lives changed.

My brother and I spent quite a few hours reenacting videos like Beat It and Billie Jean, and of course don’t get me started on Thriller! Since our town’s newspaper wasn’t so great, we subscribed to the Memphis Commercial Appeal, and we anxiously awaited to receive the issues which contained the MTV schedule for the Thriller video. Our mom made sure we turned on the TV at the right time!

I wasn’t a big fan of Michael Jackson in his later years, but Porkchop introduced me to the Jackson 5 discography, and I now have the backing vocals of ABC and other hits engrained in my head.

Have you ever seen Porkchop dance to the Jackson 5? It’s awesome.

I’m enjoying working on this:

It’s the nautiloid pattern from Knitty, and it’s so fun to knit!

Just a couple more days until we have some ripe cherry tomatoes!! So exciting!

Using a gift certificate I received recently, we dined at Trattoria Marcella last night. For the $12.20 we paid after the certificate, it was a good meal. I would have been a bit disgruntled otherwise; not due to the food so much as to the service. For example, we sat and sat, and although we received water and yummy hot bread with a cannelini bean dip, there was never mention of our server. Servers walked around all about us, but no one approached. Finally, a guy showed up and explained there had been a “mix-up.” We received our food in a timely manner, but our server seemed like he couldn’t care less about us. My seared tuna was tasty, as was Porkchop’s shrimp and rigatoni, but I didn’t really feel welcomed at the restaurant or well cared for, and the food wasn’t so astounding that I want to hurry back.

A few months ago, some very special yarn caught my eye. After searching for the perfect pattern, I decided to go at it on my own.

But nothing was working, so I decided upon a little elongated garter shawlette pattern.

I finished the shawlette over the weekend, and feel rather meh about it, so now of course I’ve found the perfect pattern for the yarn: this slipped rib scarf.

What’s a Yogini to Do?

For yoga this evening, I went to my beloved YogaToday after perhaps a 10-day absence. My, my, how things have changed!

New layout, new features, and a new pricing structure. Yep, we finally have to pay!

I’ve always said I would pay for YogaToday videos, but now I actually have to make the decision. Pony up the money, or find something else. (They will have one free video a week, but that can mean you’re stuck with a novice class with Neesha, as I was tonight.)

Adi and Sarah are my favorite instructors ever – better than anyone with whom I’ve had an actual class. So…I might just do the $9.99/month unlimited subscription.

In other yoga news, I’m rather close to achieving mayurasana. I dreamt about it last night, and awoke inspired. More practice, more practice.

Have a great Friday!

All of this rain is helping our garden plump out nicely.

Like these pole beans! (And what might prove to be the last of the sugar snap peas.) Pole beans are kind of crazy.

My attitude toward labeling plants is label, schmabel, you’ll know what it is when it grows. So, unfortunately, I can’t remember what these guys are! Super choice, maybe.

I’m pretty sure these are black krim:

And I’m hoping these are sungolds: 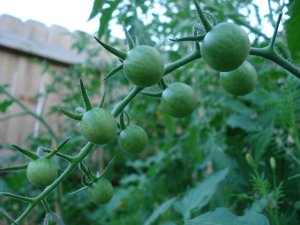 Also, check out our first pepper! 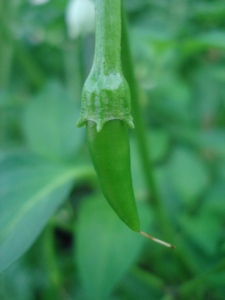 Finally, here are some squash buddies:

Butternut and delicata, no confusion here.

So, as you can see, there are lots of good things happening in the garden. However, we’ve also had some minor difficulties. It’s all a great learning experience!

Here’s what I’ll keep in mind for next year’s garden:

Also, I might relent next year and label what we plant.

How I miss Wisconsin for its plentiful rhubarb! A friend of ours had a whole mess of rhubarb in his yard, so we were never in short supply. Unlike here, where there is only a smattering of rhubarb in the farmers’ markets (in the ones I’ve been to, anyway).

It uses a ton of sugar, but it’s worth it. The dried stuff is good for baking, but I enjoyed it most right after removing it from the boiling water and rolling it in sugar. When the peel still has liquid in it, it’s like eating one of those garish candy orange slices that you buy at Walgreen’s, but only a billion times better because it’s real. When I first tried the orange peel, it was like a big carnival in my mouth – so much flavor! Yum!

But, don’t worry, I didn’t eat all of the orange peel. I reserved the rest for the jam, which also used ginger and crystallized ginger. The rhubarb hung out in a big bowl of sugar for a day, and then I cooked it all up. Since this jam didn’t use powdered pectin, I had to cook it for a while over high heat. While doing so, I suffered my first canning injury when some of the hot hot hot jam spattered onto part of my toes not covered by my Keens. Ow.

In the end, I came out with this:

Two pints and one half pint. Yep, 2.5 lbs of rhubarb, 5 cups of sugar, 1/4 cup of orange peel, and 4 oz of crystallized ginger, and this is all I have to show for it. Well, it is quite tasty, so that’s a good thing.

All for now! Have a great week!

I’ve been stressing out about my tomatoes and other garden things, so I breathed a huge sigh of relief when Porkchop spotted these guys today:

Maybe I will have tomatoes for real this year!!

I also love looking at this little delicata squash and its unpictured mate. Correction: this is just the ovary…not an actual squash. Let’s not get too excited.

Our squash plants are NUTS.

On the tomatillo front, so far there is only a single real one:

But I’m not too concerned, as tomatillos are known to have lots of empty husks, and then BAM, you’re drowning in the suckers.