How quickly October has passed! It seems like I was just feeling better from my little virus, and then I was sick again for a week with stupid allergies, and now it is today and less than a week left in this month. I know it’s always the same old lament, oh woe, there isn’t enough time, but really, WTF?

Besides being down with allergies, I’ve also been working away on my class stuff. In October alone I conducted two interviews, did two observation procedures, and conducted a survey, as well as wrote all of these up in reports. In November, I get to do more of the same for my final project. It’s actually rather fun!

Other things in October….

Apples! We didn’t pick any more, but we purchased a big bag from Eckert’s and canned apple butter and apple preserves: 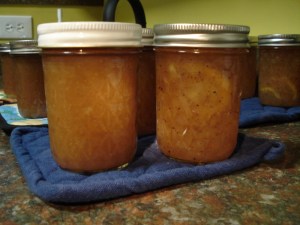 The apple preserves (on the right) are nice and lemony and nutmeg-y. The apple butter (on the left) is very fall-like with cinnamon, cloves, and nutmeg, but it didn’t get super thick. If you like applesauce, you would like our apple butter. I do, but next year I might try a crockpot recipe to see if it gets thicker.

Porkchop also made the most delicious apple pie using this recipe: 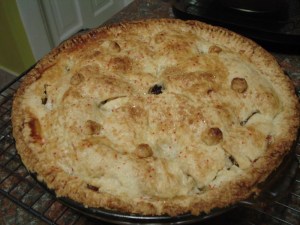 This is totally my favorite apple pie ever. I’m not a big apple pie fan because I think most are too sugary and rely on cinnamon too much. But this one doesn’t use cinnamon, uses a lot less sugar, and has strong lemon notes in it. And raisins! Love! I’ve requested it for Thanksgiving. By the way, I reserved our turkey today, even put down a deposit on it. Which felt kind of weird.

When we went to Eckert’s for apples, we also picked up a few mums, two pumpkins, and ornamental corn. We also purchased ornamental gourds at the farmers’ market.
I love our little gourd buddies: 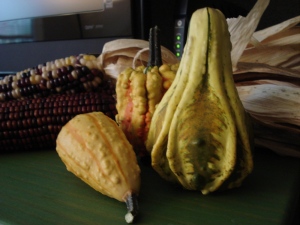 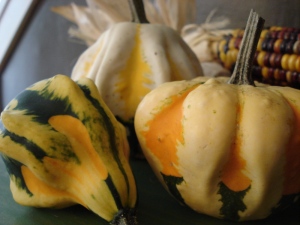 Over the weekend, I made these pumpkin spice cupcakes with cinnamon cream cheese icing: 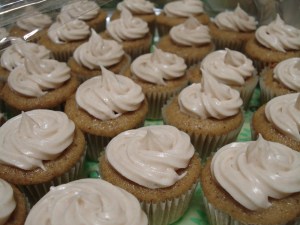 I made them mini size, which is a good thing because the icing is really powerful. I took these to our neighborhood meeting last night. After having to rig up this contraption to protect the sweet little cakes, I see why people buy those cake carrier things: 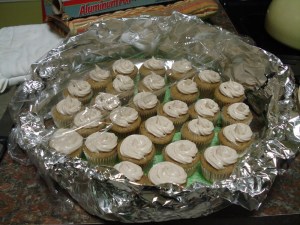 How many times will I have to construct this sort of thing out of foil and plastic wrap before I break down and purchase an honest-to-goodness carrier?

Have a great week!

To have the pain and pressure relieved from my lower back for at least a few hours!!!!! I have not felt this for years…at least a dozen.

While I’ve always accepted the uncomfortableness in my lower back as just the way things are, I finally saw someone about it when it started to hurt when I walked. I’m too young to be in pain while out for a stroll!

It turns out that I have instability in my lower back due to a vertebra in my sacrum not fusing completely (also known as spina bifida occulta, which isn’t uncommon). My L-5 vertebra (the one right above my partially fused S-1) also sits up quite a bit higher than one normally should. And I have some curvature in there, and my poor L-2 vertebra has borne the brunt of all of this. While most of my lumbar vertebrae look like happy puffy marshmallows, L-2 is kind of crumpled and sad looking.

This morning I saw the sports medicine guy again, and he did some lovely massage (as opposed to the painful deep tissue acupressure last week). But, the best part is the stretching table that he uses. He’s able to do a circular motion with my lower body while my upper body stays flat, with the flexion point exactly where my lower back is tightest.

You wear the same socks and don’t discover it until you’re in line at the DMV: 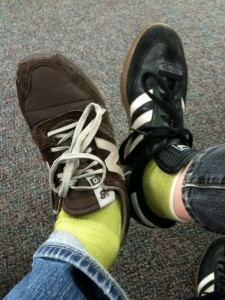 (For the record, my Adidas-clad feet are the larger ones. Porkchop wanted to make clear that hers look bigger due to the perspective. Porkchop’s feet are wee little things, while mine are giants. Also, you might ask why we even own the same socks. I don’t have an answer for that one.)

We took yesterday off work because it was the day after our anniversary (yay, nine years!), and we wanted to do fun things. Porkchop’s definition of “fun” meant making me get my Missouri driver’s license. I had delayed this task because I usually have a big problem with the vision tests. My eyesight is 20/20, but one of my eyes is placed a bit wonkily, which makes the vision machines a pain in the ass to use. I usually have to close one eye and read half the line, and then switch eyes for the next half. And the DMV employee is usually trying to rush me and won’t let me take my time, and then I get flustered and embarrassed.

Getting a license in a new state makes me nervous because I dread the vision tests so much. On the way to the DMV, I wanted to throw up.

But, what do you know! The vision machine at the DMV location we went to didn’t give me any problems! I even warned the employee that it would take me a moment because of my eye, and then I didn’t have any problems! YAY!

The DMV branch was in an awesome mid-century modern building that is round and shaped like an upside-down funnel. There’s also a rockin’ mural inside. Here I am at the vision machine with part of the mural: 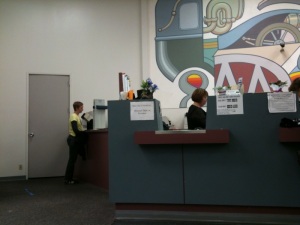 After the DMV and a few other errands, we went to lunch at Onesto. Yum! We’ve tried a few new-to-us places recently:

However, my favorite meal of the past couple of weeks was one we cooked a few days ago. Cranberry-almond pilaf, cider-braised butternut and delicata squash, and baked tofu. Yum: 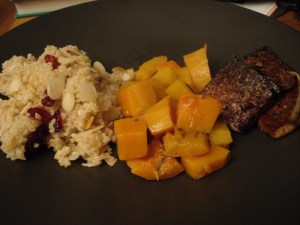 Tonight I’m cooking chorizo and black bean soup. Yum, yum, yum. I began today early with a few hours of planting new plants in a median not far from our house. It’s good to get out with neighbors and work on things! The median had housed rose bushes, but they fell prey to disease. The new plantings will look great next year: coneflowers, black-eyed susans, butterfly milkweed, prairie clover, and few other plants. I’m looking forward to a hearty soup tonight after so much hard labor.

Have a great weekend!

Getting my Mojo Back

Finally, finally, I feel close to normal. I actually want to do things and get out of bed! Yay!

The change happened late yesterday afternoon after I did a lot of breath of fire in a kundalini mini-set. Coincidence? Maybe not. Breath of fire makes my teeth tingle, so who knows its potential.

Yesterday morning, I barely even wanted to go to the farmers’ market! But we pushed on, and I picked up a couple of pumpkins. Later in the afternoon I cooked them and made some pumpkin puree.

So, when I awoke refreshed and ready to go this morning, I made this pumpkin bread recipe. Yum! I came out with 6 muffins and 3 mini loaves: 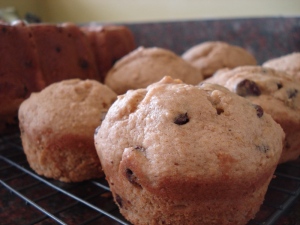 After Porkchop came home from hockey practice, we roasted the pumpkin seeds. Triple yum! We kept the seasoning simple with salt, cinnamon, and cayenne pepper. I could eat these pepitas all day. Here are the seeds ready to be seasoned and roasted: 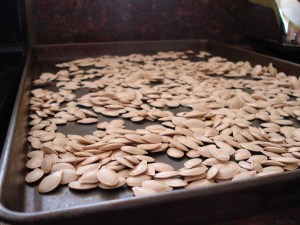 Since I was home for two and a half days, I made some knitting headway. Last week, I ripped out the Icarus shawl that had been sitting around unfinished for over a year. Now I’m using the yarn for a Clapotis. Yep, I’ve finally jumped on the Clapotis bandwagon! 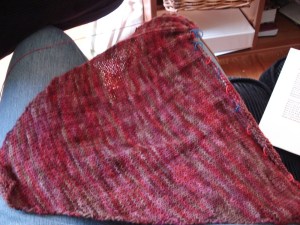 This afternoon I finished the increase section and dropped my first stitch! Here’s a close-up, which shows the yarn color better too: 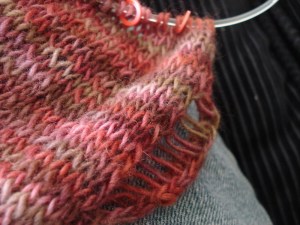 Have a good week! Stay well!