Besides knitting on a secret project, watching the Olympics, and working on school work, Porkchop and I fit some fun things into the past weekend.

We kicked it off with dinner Friday at Thai Basil Spice, followed by enjoying some wine and the Olympics opening ceremony. The ceremony pretty much sealed our desire to move to Canada. Plaid-clad punk fiddlers? kd lang performing the closing song? Slam poetry celebrating diversity? I want to move there!

Saturday was full of grocery shopping and watching Porkchop’s hockey game. Oh, and people watching from our house! The Mardi Gras parade was Saturday, and people in our neighborhood (about a mile from the parade) really got into it. It was great to see people walking around decked out in beads and fun hats. Quite a few floats went down our street on the way to the parade, so we got to enjoy some of the parade without being crushed by drunken revelers.

While I normally stay home for Porkchop’s Sunday morning hockey game, I went this time. I’m glad I did because Porkchop had the most awesome goal! She was on the goal line – so parallel to the net – and was able to launch it in the top corner as she spun around! Everyone was super impressed.

After the game we lunched at La Dolce Via. Even though they were out of the tortas and I had to settle for an egg scramble, it was super delicious. Here I am living it up with a cup of decaf coffee and a slice of their zabione. Yum!

Sunday evening, we made jumbalaya using Emeril’s recipe. We increased the amount of vegetables (1 onion, 1 green pepper, 1 celery stalk, and a can of diced tomatoes) and give it two thumbs way up. It tasted much better than it looks here: 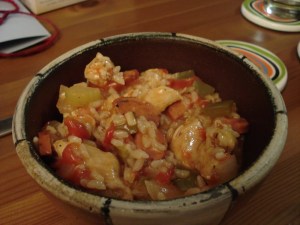 So…my eye is still twitching. I’m trying to accept it without letting it control me. It’s very svadhyaya (self study). The twitch has made me become self aware of my efforts and limitations. While I can’t control the twitch, I can control my feelings about it. In short, I’m trying to not get stressed out because of it and waste energy on it. The hardest part is going to work. Work makes my eye twitch, and the twitch gives me a headache, and the headache makes it hard to work…and then it’s an endless downward spiral from there. Ah well, I’m still trying to remain hopeful that it stops soon.

3 thoughts on “Self Study”