I preface this blog post by stating that I have never been good at lying.

I can handle occasional white lies to soothe people’s nerves, but I can’t misrepresent thoughts or events. If something didn’t actually happen, I can’t state that it did. This has its upside and its downside.

Porkchop’s birthday was a little over a week ago. Since she was feeling down about turning 31, I wanted to do something really nice to show how happy I am to celebrate another birthday with her.

I don’t have many chances to surprise Porkchop because I don’t drive to work. This means I don’t have a chance to sneak away somewhere and purchase something awesome.

Candy from the university bookstore gets kind of old as a surprise.

Before Porkchop’s birthday, I wasn’t able to make anything secret either because she was at home when I was all the time! She was busy doing class prep and working on a print for the faculty show, and she never left the house!

Therefore, I decided to take the Friday off before her birthday and bake a cake, make a great birthday present display, and clean up the downstairs (which was super messy from working on prints).

I rode to the Central West End as per usual with Porkchop and even bought us bagels from Einstein’s. I stayed at the UPS Store for a bit and then left to catch the train. Only, instead of going to work, I went back home!

Once I was home, I got down to business and started the cake. We once made a chocolate-hazelnut-orange poundcake that Porkchop really liked, and since it takes a lot of prep work, we had only made it once. So, it seemed like a good choice.

It took about an hour just to get the batter ready (toasting hazelnuts, chopping chocolate, zesting oranges, etc.). The batter was super pretty. 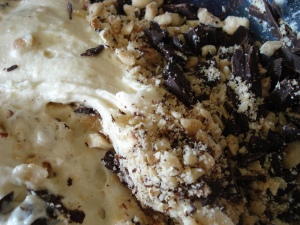 Once the cake was in the oven, I wrapped Porkchop’s presents, which took me at least 40 minutes because I’m a slow wrapper. Then I found our birthday sign, and arranged presents and photos of Porkchop atop our bookcase. The cake was the centerpiece (it was huge!!).

The whole time I was working on the cake and the presents, I was so happy because I finally had a chance to surprise Porkchop with something.

Next, I cleaned up the first floor of the house, which took another couple of hours because it was a total disaster site.

Finally, I had a chance to sit and rest a bit, and that’s when things went wrong. I knew Porkchop was leaving work at 2:00 to drop off her prints at the school gallery, and I thought she would surely come home afterwards since it was so early.

Of course she figured out that I was at home. And I knew she would be not happy because Porkchop doesn’t like surprises! (I know – weird!) I was correct that she spent the whole ride home wondering what I was doing and stewing about it.

So, when Porkchop came home, I was like, hi!, and then Porkchop was all grumbles and didn’t even SEE the birthday display or all the work I had done.

Then I said, look and pointed at the bookcase and started crying because I had so much emotion building up in me all day and it had to come out somehow.

After a little more crying on my part, we did a do-over and Porkchop acted excited about the birthday display.

And then I cried some more.

The next day was better, and Porkchop opened her presents. 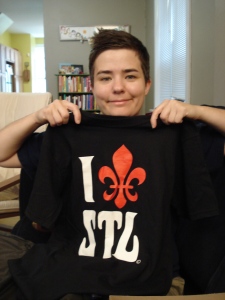 We cooked out by the lake (which is near Dale’s parents’ place and is on private land) and hung out all day.

Fishing the day away

It was quite relaxing.

Except for the excitement surrounding this spider:

When we first arrived, there was a kerfuffle on the dock involving this spider, Porkchop’s younger brother, and his 8.5-month pregnant girlfriend. This spider jumped over their heads at one point. Seriously, it was ridiculous.

Anyway, other things have been afoot, but this post is long enough.

Have a great week!

A couple of days ago, I was driving down our street and I saw something that amused me to no end. While I was stopped at a light, a guy rode his bike across the street. I noted that, instead of a water bottle, he was carrying an open Busch tallboy in his water bottle holder.

I love our neighborhood.

During our bike ride on Sunday, we stuck to carrying boring old water. 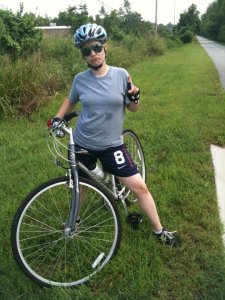 I had selected a 22.9 mile loop from Madison County’s awesome trail system, but we missed the turn-off for the Heritage Trail and ended up going on a 25.7 mile loop.

Porkchop accused me of being happy that we missed the turn-off. While I denied it at the time, I was secretly happy.

With trails that go through forests, by lakes, and other lovely environs, we will definitely take many more bike trips across the river!

Spin Me Right Round

Yesterday afternoon at 4:00, I was struck with dizziness, and I’ve been plagued by it since then. I think it’s a combination of fatigue, low blood pressure, and the heat. In any case, I don’t like it.

You know I feel bad when I decide to skip the Tower Grove Farmers’ Market.

We did, however, stop by the Mud House for brunch. Last night I saw a picture of the Nutella and Nanners crepe, and I started craving it big time. It probably isn’t what the doctor would suggest for someone with the dizzies, but it’s darn good. 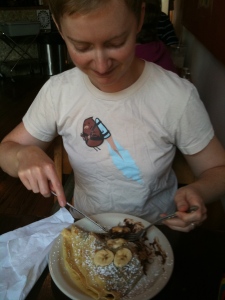 And then we went home and watched a bad gay movie, Make the Yuletide Gay. The Netflix instant play pool is really kind of small, thus this laughable movie. (Another sign I feel bad: I watched a movie at 11 am.)

We went out to REI after the movie and procured a new bike helmet for Porkchop. I’m hoping to feel tons better tomorrow and go on a bike ride.

After REI, it was back home to watch a baseball game (see – another sign I feel like crap!). I knitted during the game on a new project, Springtime Bandit. I’m loving this pattern! Easy, but not boring. 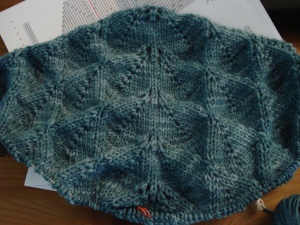 During the game, Porkchop went outside and came back with potatoes! 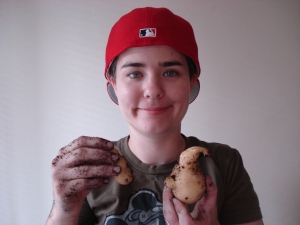 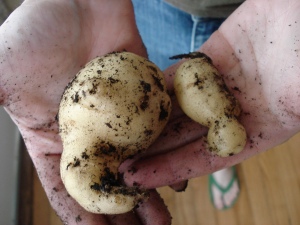 After last year’s letdown, we’re pretty happy with this harvest. If the chickens hadn’t turned the potato plants into a roost, maybe we would have more. Note for next year: build chicken-proof potato area.

This summer just keeps going, and my enthusiasm is unfortunately waning. Of the five summers I’ve spent in St. Louis, this is the hottest one yet and I’m tired of it. We’re slated to have at least two more days this week with highs around 100.

It’s hot, and my garden stuff is not going well. So, for me, I’m ready to kick summer to the curb.

Last weekend saw us doing fun summer activities like fixing the dishwasher and replacing our sump pump. Porkchop did the dishwasher repair, and it was not fun at all. It required two trips to hardware stores and some irritation. The sump pump was easier, and we love our new sump pump. Goodbye stupid float, hello water sensor switch.

Sunday saw some enjoyment, at least. We started our day with an easy, scenic 14-mile bike ride on Grant’s Trail. Although I’m not a Real Biker (yet), I’m at least trying to look the part. 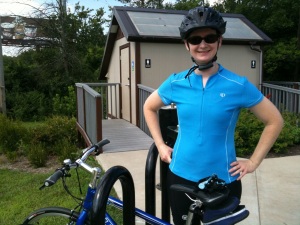 Faking it as a biker. Luckily you can't see the Keen sandals on my feet. (Also, yes, I'm posing in front of a composting toilet.)

After the ride, we attended two baby showers. Two!

For about four months now, I’ve been working with other neighborhood association members on our first big event, the Broadway Art-A-Fair. The fair was yesterday, and it was quite successful. We had 10 artists selling stuff, a guy doing pencil portraits, two bands played, St. Louis Hoop Club did hoop performances, a capoeira group did a demonstration, a local restaurant sold food, and we sold drinks and baked items. The fair was held outside the old firehouse in our neighborhood, and the first floor was open for people to look around.

Hooping outside the firehouse.

Old circus banner hanging in the firehouse. The banner is huge! At least 8 feet tall.

It was a great day! For our first fair, it was a really good turnout. I only wish I could have stayed for everything, but I had to leave early for Porkchop’s cousin’s wedding.

(I’ve been to a bridal shower, two baby showers, and a wedding this summer…not that anyone’s counting.)

I desperately wanted to sleep in today after yesterday’s events, but Keetah wouldn’t let me. She woke me up at 6:50 and left me in a bad mood.

I was so grumbly, I had to go to the Y and swim it out. The chlorine in the pool is so strong, it even kills bad moods.

In the afternoon, I made this zucchini cake with crunchy lemon glaze. I think mine turned out pretty well. 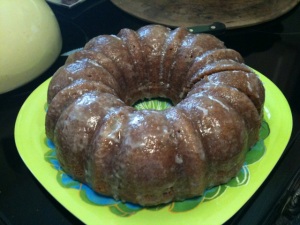 This cake was a community effort. My friend Ale gave me the zucchini, and my neighbor Tom lent me his Bundt pan. While it might be a tad underbaked, it is quite moist and will be perfect with tea tomorrow.

Lastly, Porkchop has been trying to become the chickens’ buddy. The other night she climbed into the coop and caused feathers to be ruffled by accosting and petting Agnes and Scooter. Here she is with Agnes.

Please be my friend!

All I want for next week is to get through the heat without our electricity going out (which it did last week twice in the same hot night). However you measure it, I hope you have a good week as well.