Over the weekend, I cut myself while washing our sharpest kitchen knife. It was a clean, deep cut, and on a spot on my thumb that is used for everything apparently.

Since the cut wouldn’t close up on its own, I brought out the super glue and patched myself up. Yay!

Seeing how it worked so great on my thumb, I thought I would super glue together my hiking boots. These boots have taken me through 11 years and various circumstances, so I was quite sad to put on the right boot yesterday only to find that the heel was starting to detach.

When we set out for a hockey game last night, the boot damage didn’t seem so terrible, and I decided to wear them anyway. However, the boot situation deteriorated rapidly. After the game, Porkchop tore down the Scottrade stairs, while I followed as quickly as my flopping boot would allow. At this point, the heel was completely detached from the sole, and it kept bending back on itself and slipping under my toe while I went downstairs.

It was rather awkward.

Walking on a flat surface was fine, as I could kind of drag it along. Going upstairs was fine too. But downstairs…going down was a killer. I thought the hockey crowd would swell up behind me and push me down all five flights of stairs.

Fortunately, I made it home okay, and got to work on my boot.

But get this…when I put super glue on the boot sole, some sort of chemical reaction occurred and my boot starting smoking! Whoa, dude!

Super glue: safe for your skin, but not your soles. That’s the lesson.

I have some new/recently finished items to show you!

Over Labor Day, I finished knitting my Springtime Bandit. However, I didn’t have a good way to block it until recently, as I received blocking wires from Porkchop at Christmas. This new scarf is fresh off the blocking wires:

Springtime Bandit in the Winter Time

It is made of Malabrigo Twist and is super soft and squishy. 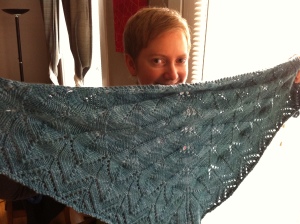 Don't look too closely, or you'll see my mistakes.

After I finished knitting the bandit, I made a Daybreak shawl for Porkchop in St. Louis Blues colors. I wrapped it up at the beginning of November, and it too sat around unblocked and unworn until recently. 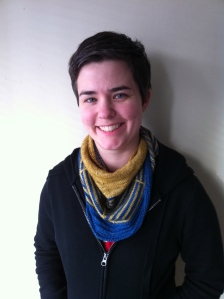 Styling with the Daybreak

The blue yarn is Malabrigo sock yarn, and the gold is Madelinetosh. It was my first time using Madelinetosh, and I see why everyone loves it so much. 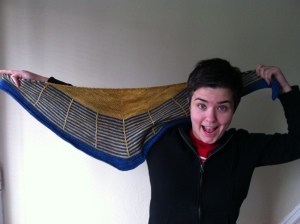 I’m happy that Porkchop is happy with her Daybreak. I’m working on one for myself, but I’m sure it won’t be finished until next year.

This afternoon, I had tea while studying GRE math, and I used my new mug. 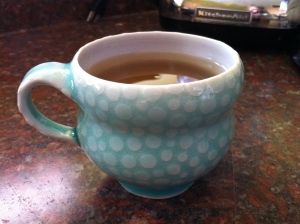 Porkchop picked it up at a St. Louis Community College – Forest Park ceramics sale, and it’s a wonderful addition to our mug cabinet.

I used a bit of honey because it was green tea, and I took a picture of the honey too. The names of the honey producers amuse me. 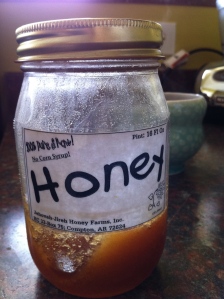 We picked up this jar last April while staying on Mt. Magazine. We went with my family to a cemetery that holds a couple dozen of our relatives, and the gas station near the cemetery was selling this honey. This is my favorite type of souvenir.

Tomorrow is the last day before this year really picks up. My classes start this week, and it will be strange to be a student again. I’m taking Anatomy & Physiology II and Statistics for the Health Sciences. Depending on the stats workload, I might pick up a late-start, online Abnormal Psychology class through the community college.

Porkchop starts teaching on Tuesday as well. She has two sections again, and will be in the classroom 4 days a week (in addition to maintaining her manager position at the UPS Store). Porkchop is also curating a show for the Southern Graphics Council conference this year! The conference is here in St. Louis, and Porkchop put together a University of Wisconsin-Madison alumni/faculty show. The reception will be during the conference in March, and I’ll post details later. It will be packed full of great prints!

Have a good night and a great week!

When I set out to pick up prerequisites for physical therapy programs, I did it with such enthusiasm and gusto. I looked at various prerequisite lists and saw what I was lacking and thought, this won’t be so bad! I can do it! And apply for Fall 2012! YAY, only two more years at my job.

Only, now I’m starting to consider the details of the DPT programs, and there are big holes in my plan.

By talking with admissions reps in a couple of programs, I realized that Mizzou had a stupid chemistry sequence when I was an undergrad, and I didn’t have all the topics expected in a Chem 1-2 sequence. So I need to re-take Chemistry 1 and 2.

The chemistry news killed my soul a little, but it’s nothing compared to what I’m learning now. All of those classes I took as an undergrad that I thought I could use towards prerequisites – general biology, general psychology, calculus, all of my biological anthropology classes – won’t count. That’s right, all of my gazillion credits of general education classes won’t count. Because they are apparently old and ancient. While not widely publicized on their websites, it seems most programs have a time limit on prerequisites: they must be taken within 5, 7, 10 years.

Even if I use the most generous time limit, my classes don’t count.

And it means telling people, yeah, when I said Fall 2012, I didn’t know what the hell I was talking about.

The good news is that I have lots of time to collect my 100 volunteer hours now. But that’s the only positive I see. Throw me a bone if you have one to add.

Having to be Mean

Overall, I consider myself to be a genial individual.

From an early age, I learned how to exchange pleasantries with strangers, how to ask polite questions to put others at ease, and how to make polite conversation about nothing.

A few weeks ago, I made the (now apparent) mistake of conversing about the weather with a stranger at the Metro stop. It was really darned cold during that period, and we talked about how cold it was.

Given my background, I thought we were doing what strangers do when shivering under the heaters at the Metro stop, desperate for some relief from the cold. When you’re ass-cold, you like to tell other people who are also ass-cold, that you’ve been colder before.

It makes you feel somewhat better. For example, “When I lived in Wisconsin, it was much colder than this. This is warm compared to Wisconsin. Wisconsin was bone-chilling cold.” See, you suddenly feel less ass-cold.

After our conversation, I thought we might say “hello” to one another in the morning, or give a brief nod and smile. Because that’s what you do with strangers after you’ve had a brief, impersonal conversation with them. You stay nice, but you stay back.

The stranger, however, interpreted our polite Metro-stop-conversation as a sign that I wanted to be his best friend.

He quickly progressed to standing right in front of me until I acknowledged his presence. He started putting his hand over my phone when I was clearly occupied with other activities. He started making fun of me to get my attention.

He crossed over all sorts of Metro-stop-stranger boundaries.

One morning, a woman pulled me aside and whispered, “You know, if you ever feel like he’s hitting on you, you can come talk to me.”

Other people notice that this guy is not operating according to the polite stranger etiquette code.

So, I’m having to pull out the meanness.

For me, this is Phase 1:  Non-acknowledgment, and Phase 2: Keeping in my Earphones and Ignoring Questions. Tomorrow morning, I might have to practice Phase 3: Standing in a Different Spot and/or Moving Away.

It’s a weak meanness, but even this feels huge to me.

Anyway, starting my morning by having to be mean really starts things off on the wrong foot.

It is my hope that the current guy will quickly get the message and leave me the eff alone. Why can’t all people just be nice and polite?

So, this is totally random, but I need to share it with people.

Today, I was on a Ravelry forum, and someone referenced Pine Mouth. The more I read, the more the symptoms sounded eerily familiar.

Going through my blog archives, I found that I wrote only one entry in April. In it, I document a pizza that we made using pesto and sundried tomatoes.

Coincidence? I don’t think so.

Just the thought of that metallic taste makes me shiver. Blech.

It’s that time of year when I start vegetable garden dreaming. This year, I’m going to rein it in a bit and keep things simple. Because, let’s face it, small realistic dreams will be more successful.

My big dream would be to install a wall of herbs (something like this) in a doorway that we never use (just as we have two front doors, we have two back doors). But…that might be too much work for now.

Last year, I put in a lot of hours in our community garden, and I really suffered burn out from it. Given my time constraints and studying duties, I am reluctant to sign on for it again. I would do it if I could have just one plot, rather than everyone working on the entire garden. Also, if the garden had its own water spigot, I would be in for sure. The current water situation (calling a neighbor to turn on their water) is rather inconvenient.

What are your garden thoughts?

2011 will be a terrific year! If it isn’t naturally so, we will make it great by the sheer force of our mental powers. And by growing vegetables, tending chickens, baking cookies, and learning new things.

I’ve dropped stranded knitting from my list because that was going no where fast.

Last night we hosted an engagement party for Porkchop’s younger brother. Considering the size of our downstairs, we packed in a good amount of people. The count was 18 or 19, and I felt like we cooked for a crowd three times that size. (I do not want to cook for at least a few days, seriously.)

Because preparing for a large crowd of people isn’t enough work, we also switched bedrooms this weekend, which involved painting, moving furniture, and hanging curtains. Porkchop did a lot of the work, but I do take credit for moving the dresser. We put it on its side to slide it between rooms (the only time I’ve been grateful for our carpeting), and then we had to tilt it back up. Porkchop guided it into place while I squatted on the floor, wedged my fingers between the dresser and the carpet, and deadlifted all 150 pounds of it using only my hamstrings. I felt like a champ after the dresser was back on four legs.

Last week, one of our chickens was bleeding from a cracked comb and had to come inside for some doctoring. After a round of hydrogen peroxide, antibiotic ointment, and some Vaseline, Scooter was doing much better. She even posed for a picture!