I’m in a bit of a crunch time at work with nearly every minute planned out, so I’m stealing a few minutes to post on this here neglected blog.

Yesterday was a big event at work, and then we have a conference that starts Sunday night. So…I’ll be clocking around 8 hours on Sunday, 14 hours on Monday, and 10 on Tuesday. Then I have a test Wednesday night. And then, then! I leave for Minneapolis on Thursday for a good five days! Hurrah!

Last weekend was my dad’s birthday, so I went down for a visit. The big difference for this trip was that I flew! Yes, there is now a flight between St. Louis and my parents’ town in northeast Arkansas. February is the first month of service, and round-trip tickets are promotionally priced at $50. Sweet!

The plane, as you can see, was small. Teeny. Seats for 8, and don’t even think about a bathroom or beverage service. Pictured above is the plane I rode in on the way down. It was once the private plane of the governor of Maine (hey, that rhymes), and had big, comfy leather seats that swiveled around and laid all the way back. It was rather luxurious.

One nice thing about the teeny planes is that they cruise at such a low altitude, you have plenty to look at during the flight. Stuff like…farmland. 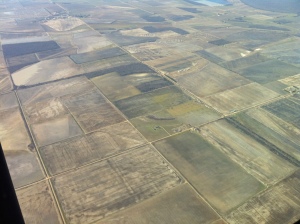 There was more farmland, but I only took one picture during the flight.

When leaving Jonesboro, I remarked to my parents that there were no security measures at all. Not even a wand. While glad to take my full water bottle on board, I couldn’t believe it. Upon arriving in St. Louis, we found out that any passengers with connecting flights had to go through security there because Jonesboro doesn’t have any TSA stuff going on. Just think of all the stuff I could have smuggled aboard had I only known!

On Tuesday, I bought a new pair of shoes. This is rather monumental for me.

What is especially notable is that these shoes are shiny metallic and have a stylized bow on them. Apparently, this is the sort of shoe I wear now:

These shoes are prettier when not on my office carpet.

I’m also in love with a pair of bright yellow pants at Target, but they’re a tad too tight for comfort. These are surprising changes in the clothing front.

For the past couple of weeks upon awaking, I’ve been writing a list of 10 things for which I’m grateful. Actually, I write down things that make me sad and angry too. The point is that writing them down is supposed to move you towards acceptance. I like this practice, but since I always spend some time free-writing afterwards, I either need to get up earlier or move it to the night.

I used to keep extensive, detailed journals, but I stopped quite some time ago. It’s been good, yet uncomfortable at times, to start again.

I’ve also been rereading parts of some old journals, and I’ve been quite struck at some of the keen insights I had way back then.

Journaling: it’s a good thing to do.

After a night of little sleep, of anger-filled dreams in which I’m running in the rain while crying, I listen to this song on constant repeat:

Last night I dreamt I was in an anatomy class, and our assignment was to write a poem using anatomical features that we were studying.

Free verse spoke to me, and mine began something like:

Because it’s so large,
you might think the
foramen magnum is on the
pelvis.
But you would be wrong.
It’s on the skull,
along with the foramen organa.

(Note: there is no such thing as the foramen organa.)

I do wish I could remember the rest of my poem, as it really picked up after this part.

I miss my anatomy and physiology classes.

This morning I bought this dining set off of Craigslist:

It’s a Drexel and is in nearly perfect condition – only a couple of light white rings that I can remove! The owner kept a mat on the table and kept the cushions covered. And the caning is all perfectly preserved. I dare you to find a retro Drexel table in better condition!

I can’t believe my insanely good fortune on this table. While this set would be priced at least $800 in the vintage shops around here, I paid just a small fraction of that. I didn’t even haggle with the owner because I knew I’m practically stealing the table from her!

For the past few years, one of my biggest wishes for St. Louis has been for a place dedicated to salads. And not those damp, limp salads found on many salad bars, or salads that are considered daring for having cranberries or cherries on them.

I wanted a salad place with fresh, crisp lettuces and spinach, with toppings like hazelnuts and quinoa and fun cheeses.

To my great delight, I recently discovered that such a place now exists!!! I am seriously beyond ecstatic!

I went to Green Bean in the Central West End the other night, and it did not disappoint!

You can design your own salad or order one of their combinations. If you build your own, these are all the possibilities from which to choose:

The Barcelona – romaine, roasted peppers, asparagus, eggs, almonds, manchego, and romesco – sounded perfect to me. The only change I made was to add chicken, although it would be quite filling without the extra protein. Here it is:

The salads are large enough to leave some and take it to go, but I was so happy, I ate the entire thing in one sitting.

The plastic bowl and utensils are compostable, but it would be nice to have a to-stay china and silverware option. I appreciate the compostability, but I think compostable plastics generally take a long time to break down.

Other than that, I have absolutely no complaints! I will definitely return for more salad!

PS You might notice that I now have a browser logo! Thank CJ for urging me to use a little Keetah picture!